“The Wanderers Ground is a soggy mess.”  writes Tim Bousquet (Aug. 28).  That’s why a long-planned Rugby Canada Match against Glasgow (Scotland) Warriors scheduled for the Halifax Common’s Wanderer’s Grounds had to be re-located to Spryfield.
Read the story below for details on how the Halifax Common remains a city priority. 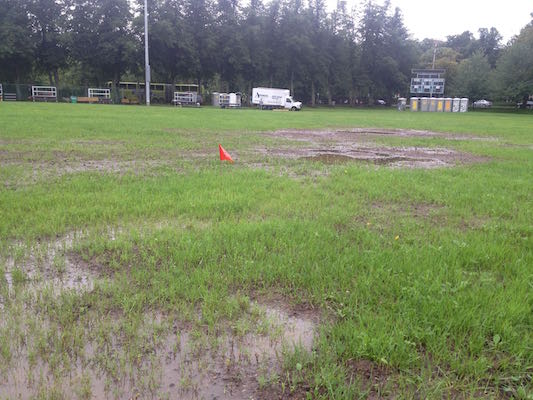 The Wanderers Ground is a soggy mess. Photo: Halifax Examiner

Rugby took centre stage at a Halifax council meeting in June, when, citing the potential economic impact from thousands of spectators and a world-wide television audience, councillors approved $30,000 in support of a Rugby Canada match against the Glasgow (Scotland) Warriors. Council then subsequently upped the $30,000 to $50,000. Deemed the “Battle for New Scotland,” the match also received $70,000 in support from the province.

The match is wrapped in much fanfare, and celebratory events are scheduled through the next few days. This afternoon, a “Giv’r” beer tent will be set up on the Wanderers Grounds, and a street fair takes over Argyle Street in the evening. A “Tailgate Party” is planned for Argyle Street from 10am to 2pm on Saturday, and the tipsy revellers were presumably to have walked over to watch the 3pm match at the Wanderers Grounds.

But officials with Rugby Canada and the Glasgow Warriors have deemed the playing field unsafe and refuse to play on it, confirms a spokesperson for Sports & Entertainment Atlantic, the event management firm that is producing the game at a cost of $90,000.

So now the tipsy revellers will have to make their way to the Grave-Oakley Memorial Park in Spryfeld, where the match has been moved to. Thankfully, the city has announced that Metro Transit buses will be used to shuttle fans from Argyle Street to Spryfield.

A source told me yesterday that the Wanderers Ground playing field is a mess, waterlogged and full of rocks. I visited the site, and it was a soggy mess. I slipped in the mud, just walking around the field; I can’t imagine how rugby players could find traction in the heat of play. 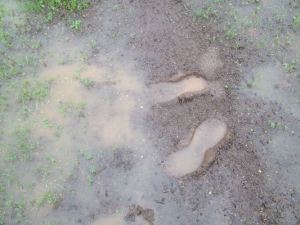 A second source told me that the city was first told about the deplorable state of the field in May. Earlier this month there was a rugby match between the Quebec and Nova Scotia provincial teams held at the Wanderers Grounds, and both teams told the city “the state of the field was urgent.” Only last week was a steamroller brought to the field, for some unstated purpose.

“On Wednesday, a plea went out to the rugby community to show up at Wanderers Ground to help remove stones and twigs from the pitch,” said the second source.

“This is some seriously embarrassing bush league kind of stuff,” said the first source. “I can’t see how you could get 5,000 seats, and a beer garden, and a TV broadcast setup, and changing facilities, and transportation infrastructure set up in 72 hours with no advance planning. Not to mention the Argyle Street tie-in.”

I’ve granted anonymity to the sources because they feel speaking publicly will change the focus of the event. The rugby community has been fully invested in making the weekend a success, raising $100,000 on their own to match the government grants, and putting in untold free labour.

The first source got back to me this morning:

Apparently, they’re constructing a new field across two of the existing fields at Graves-Oakley — The “Soccer Field” and the “Lower Rugby Field.” Those two fields are in the best shape of the three out there, but either, alone, would have been too small for an international match. (They’re too small even for senior, competitive club soccer here, for example.) It also provides sufficient area around the field for bleachers and all the other stuff. Hell of a lot of work to do in what is now only 48 hours, but that seems like a fairly reasonable option (as compared to using the upper rugby field there, which has all the softness of baked cement at the moment.)

The second source tells me that the city has been laying new sod at Graves-Oakley this week.

(Still another reader tells me this morning that neighbours in the Leiblin Park neighbourhood adjacent to Graves-Oakley have been complaining about flooded basements ever since the Graves-Oakley park was created in the 1980s, and the situation worsened when the ballfields were installed in the 1990s. Apparently, the fields block a natural watercourse that flowed through the area, and the water is diverted into neighbouring homes.)

The city issued this statement to me yesterday afternoon:

As you know, the municipality received an application earlier this year for grant funding for this event. That request did not include specifics on field conditions; however, we understand how important it is for event organizers to have access to quality venues.

In additional to regular maintenance, the municipality has worked diligently since June with the event organizers and turf experts to get the field ready for this event. That includes aerating, topdressing, fertilizing, sodding and irrigating the field. On top of that, the city agreed to close the facility two weeks prior to the event to minimize any impact from recreational field use. Unfortunately, despite all those efforts, the turf has not responded as we’d hoped and the organizers have determined the site doesn’t meet the heightened safety standards of these elite athletes.

Upon being advised by the event organizers that relocation was necessary, the municipality worked to secure another site – Graves Oakley field in Spryfield. Right now our focus is on ensuring that field is ready for play on Saturday. Graves Oakley has been used this season for both local and provincial rugby play with no issues, so we’re hopeful the new site will make for a safe and enjoyable event for all involved. The municipality is also discussing transit options and other event logistics with the event organizers but ultimately these are matters to be addressed by those responsible for the event.

Many residents have complained about the upkeep of all area playing fields under HRM management. As commenter Gina Dunn put it yesterday:

Our fields are terrible. The best fields are outside of HRM. Both ball and soccer/rugby.

We used to have good fields but it’s just anything thing that went downhill once HRM was in charge of all fields. Communities took pride in their fields and looked after them – often free of charge.

Now all fields are contracted out to businesses who really have no connection to the fields except to get paid and spend as little as possible while doing so.

It’s really too bad. Whenever we play outside of HRM, it is always so nice to play on the nice fields.

As I keep saying, we cannot continue to freeze and cut budgets, refuse to fill empty positions, and contract out work at ever-lower prices, and expect to get a decent level of services. We’ve seen this time and again — with snow and ice removal, with grass mowing, with painting lines on the street, and now with a reputational black eye on the world stage for the failed field conditions.

You get what you pay for.

Good luck to the rugby community. But their city government has abandoned them, and it’s unlikely we’ll ever again see an international rugby competition in Halifax.

Archive of past articles